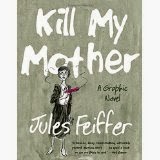 I’m reading a book with the unusual title of Kill My Mother.  What attracted me and inclined me to buy the book was the fact that it was written and illustrated by Jules Feiffer, a cartoonist and author whose work I have followed for more than fifty years, when his cartoons began running in Playboy magazine.  The second attraction was that it was labelled a “Graphic Novel”, a medium with which I was totally unfamiliar.


It turns out that Mr. Feiffer, who is now 85 years old has been very busy in the interval between my Playboy days and my most recent purchase.


He has written two novels, a successful memoir and several children’s books.  He has written several plays, including Little Murders, which was made into a film.  Mike Nichols adapted one of his unproduced plays as the film Carnal Knowledge, and Feiffer, introduced to Hollywood, then scripted Robert Altman’s Popeye, which starred the recently departed Robin Williams.  His more than forty years of cartoons from the Village Voice have gone through several iterations of print.


Not bad for a guy who started out in the business writing balloons for The Spirit.


That beginning, and the influence of its creator,Will Eisner set him on a course of crafting slightly off-center cartoons.  They, in turn opened doors to theater, film, teaching positions and a lifetime of drawing original cartoons.


The Graphic Novel would seem a natural progression because it is, after all, a hardback comic book.  There is significant character development, a serious plot, and his signature art work, all of which cause me to nibble away at it rather than to devour the entire book in one sitting.  The characters are stereotypes: the rebellious daughter, the young widow, who hides her brains and bravado from the Mike Hammer-type, hard-drinking private eye she hopes will find her husband’s killer.  There is even a Mysterious Woman.  I have yet to find out how she fits into the story.  It is my first Graphic Novel, but I may look at the genre again.


I would have plenty to choose from!


The origin is given to a “picture novel” published in 1950, titled “It Rhymes With Lust” but the next serious contribution didn’t come until 1968, when a Balloon-narrative novel called His Name is…Savage, with a character looking remarkably like Lee Marvin, hit the stands.  Purists would argue that the true original Graphic Novel was Gil Kane and Archie Goodwin's Blackmark, which came out in 1971, building on the popularity of Dungeons and Dragons.


Comics as a medium were changing and I can remember making good use of the Classic Comics edition of Tale of Two Cities.  It helped my eighth-grade son get through his English assignment.  And DC Comics was modernizing the comic book landscape leading to todays fixation with the Action Heroes we see on the screen.

Perhaps those films were what caused Feiffer to come out with this book.  We have a generation that seems to want ever more action and violence with their stories.  Not that they are unique.  I grew up with television and film with Superman, the Green Hornet, Batman, and Wonder Woman.  When one goes back, one wonders if we would have won WWII without them.


At the time I bought Feiffer’s book, I also bought the 14th book in the Captain Underpants series.  I originally thought it also might be a graphic novel but, although heavily illustrated, it is just a children’s book.  I have been searching for why it is so controversial, without much success.  In fact the vocabulary is probably at 11th or 12th-grade level, and I would think it might encourage young readers to read, something neither of my grandsons seem to find interesting.


There is much talk about Ebola in the news, including monitoring by twice-daily temperature checks.  In my next post, I’ll track some of the changes in thermometers in my lifetime.  You may find the “what and whys” of the changes interesting.  I hope you will join me.
Posted by Doctor Eclectic at 11:45 AM