Mary and I were on our way to a music concert at the Segerstrom Center and were enough ahead of the start time that I had no problem slowing down and allowing a car coming down the ramp to merge into the after-work rush hour traffic.  That driver soon slowed to allow entry into her lane.


“That’s the true value of God Points,” I said, almost as if inspired.

Never one to be without an answer (I have a coffee cup that says, “Have a question?  Ask Dad.  If he doesn’t know he’ll make something up.”) I answered that it was my own concept that when we die, St. Peter will meet us at the Gate and total up our God Points to see which of the “many rooms” we get to occupy.


The concept probably came from my subconscious, which was recently re-treated to an old FatherSarducci YouTube clip entitled “Life Is Work”, which I have linked to this Post.  His concept is that we are paid a certain amount for every day we live, but have to repay for our sins.


My concept is that you get points for every act of kindness or thoughtfulness you do that no one notices, thus inspiring them to give back in kind.  For instance, when I was obviously in pain and discomfort, standing after my hip replacement surgery, a TSA attendant guided me not only to the First Class line, but to the Flight attendant line when we were on our way to New Orleans. 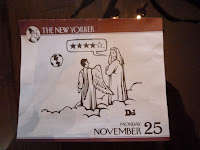 
Standing in line at Trader Joes when I suddenly remember I didn’t get my butter and the clerk says, “Go ahead, I’ll ring it up while you pick it up.” And the first of several people behind me smiles.


But once I blurted out my theory, I began to reflect on it and, perhaps like Bill O’Reilly who explains his motivation for writing Killing Jesus (Mary’s new favorite book) as inspiration from the Holy Spirit (I still remember when he was the Holy Ghost) I have fleshed out the theory.


My theory now is that you cannot gain or lose God Point opportunities until you reach the age of reason, which used to be better defined by the Catholic Catechism, but has gradually drifted into an age possibly defined with when you start driving or when you stop depending on others to make critical decisions regarding your safety, financial security or marriage.


Once you reach the age where you can collect God Points you collect them at first indiscriminately and later, when you better understand the concept, you collect bonus points by either seizing a choice opportunity or by finding ways to secretly mask your effort so that it becomes less known.  Double points come from your inspiration to the person you gifted, if they in turn provide similar kindness.


In the two weeks following our trip to the theater, I understandably have tracked my progress in gaining points.


Conclusion: I actually have increased the number of points I have gained.  Of course the fact that I am retired and time is on a different scale for me than others helps, but I think I am actually doing better.


I am besieged by Caucasian women, aged 25-34, who seem recently made aware that an automobile is a lethal weapon for which they hold the trigger.  Lines show a better result.  Even having given up my cane (except for a soon-to-be trip to NYC) I seem to attract compassion from people in line who give way for mall purchases, old age, or the threat that they make have to give CPR.


Whether you subscribe to my theory of God Points or just want to do something to make living in our culture a little more dignified, I solicit your support.


My next post is a spin on my Eminent Domain Post, which I am entitling Privatization.  Please check it out.
Posted by Doctor Eclectic at 7:10 PM