There is an old Jewish Proverb that goes, “Man plans and God laughs”.  I was thinking about that the other day while in, of all places, my shower. 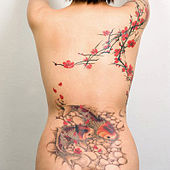 For years, beginning perhaps fifteen years ago when we were invited to attend a considerably younger co-worker's wedding, Mary and I have held a common opinion regarding tattoos on young ladies. .  The bride was beautiful, of course, as were the bridesmaids and especially her Maid of Honor, a sister with the knock-me-down dark beauty that so many of our Southern California Latinas display.  The gowns were strapless and of some shade of orange that seems to be reserved for wedding apparel.

Showing its fiery breath just short of the sister’s neck was the mouth of a four inch dragon’s head, whose body and tail would proportionately reach below her waist, had the dress not covered it up.  I’m sure the tattoo was designed to accent her beauty rather than detract from it, but we both commented that as she grew older and her body parts began their inevitable shift, she might have second thoughts about the process.  In fact, one of our continued hypotheses is that some LASER-wielding dermatologist is right now making a fortune, as the Boomers and Gen-X children reach middle-age and beyond.


Last Sunday were had dinner with a group that included a young gentleman who had just, moved to one of the less-populated areas of Texas.  His planned business is a tattoo parlor where he expects to hire several artists besides himself to meet the demand.  The expected draw will come from the Army Camp, Fort Hood, which is in the news because of the trial of a Muslim Psychiatrist who killed nine solders about to deploy to Afghanistan.

When I was a Navy Dentist serving with the Marines, a CO had to give  permission to get a tattoo, and it couldn’t show when in uniform.  I presume that has all changed now. 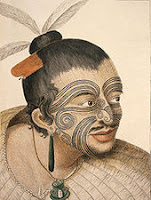 It was a navy man, Captain Cook, who brought tattoos to the Western World.  The natives of New Zealand and nearby islands thought decorating the skin with indelible ink set them apart from the riff-raff.  European young ladies of the day took to the fashion as a means of showing they were current with fashion.  Of course most died earlier than our women do today.


For those who feel as Mary and I did, there are now excellent tattoo parlors specializing in non-permanent tattoos.  I might have one of those done as I was impressed by a tattoo on the head of a man with a hairline similar to mine.


What made me think of the proverb and this subject while in my shower is that I find myself with a variety of liver spots and varicosities arranged in seemingly random fashion on my body.  I am confident that as more appear to connect the dots, God will show some recognizable pattern He has in mind.  When that happens I am sure God will laugh at my plan to avoid tattoos.


I am off tomorrow to return to Mason City, Iowa and my sixtieth high school reunion.  Since all who will be attending are likely either retired completely or in some occupation they have chosen as a second career, I hope to have enough ammunition on my return to fire off a Post on Encore Careers, including my own. Please join me.
Posted by Doctor Eclectic at 3:30 PM