Two things recently brought my attention to what I know, or more appropriately what I don’t know about PTSD.  The first was a report of several thousand military, assessing whether they were more at risk for suicide than civilians of a similar age.  The conclusion was that they were not.  The second was a speaker I arranged to speak to our local Military Officers Association: Art DeGroot.  Mr. DeGroot was interviewed in the Orange County Register about his book, Bu Ku Kilo, a not-so-approving story about his year’s tour in Viet Nam. 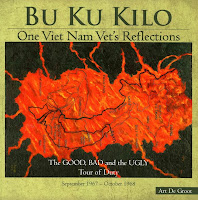 I met with Mr. DeGroot to discuss what approach he might use in his presentation.  We agreed on his answering three questions:


The conclusion of the questions was that he suffered from PTSD with all the typical conditions: hyper-arousal; with anger, and violent dreams, re-experiencing; evidenced by daytime reliving the occurrences, and avoidance; with detachment or isolation from family, friends, and daily events.  Fortunately for him his wife stayed with him and supported him until he was able to cope with the problem.

PTSD does not just come as a result of exposure to combat.  Actually it is a response to a particularly violent event in one’s life and affects almost 7% of U.S. adults.  The most common precipitant is sexual, rape or molestation, often as a child.  That explains why more women are victims than men, since only 1% of our population experiences the trauma of combat of first responders.


The term may be relatively new but the condition has existed since early history of man.  A movie from the 60’s starred Gregory Peck as Captain Newman, M.D. who was vexed by the prevalence of Combat Fatigue.  Treatment is complicated by the fact that the patient, and it is now considered a medical condition, is generally in denial that there is a problem and is reluctant to seek assistance.


Yesterday I attended a Polo match in Del Mar, which honored veterans (including me).  One of the more interesting booths was soliciting interest and funds for a program called Horses Joining Forces, which seeks to bring veterans suffering from PTSD into a feeling of trust by having them form trusting relationships with horses.  The program was started by a combat Marine who saw what value there was in horse therapy for disadvantaged children.


There were other booths at the Polo Field, reminding me that many organizations are assisting the overworked and underfunded Veterans Administration.  Even before Sequestration the VA was behind the power curve of need for Veterans.  An organization I belong to, the Military Officers Association of America has a great program preparing separating veterans for the work force.  An organization called Veterans 360, which has a similar mission, had a booth at the Polo Match.


So, the point of this Post is that I now know PTSD is not a malingering phenomenon, nor is it “all in the mind”.  I have a greater respect for those who suffer from it and even have a greater respect for what my wife experienced from my long-term absences while in the Navy.  I don’t think I ever suffered from PTSD, but her adjustment while I was deployed might very well have had the same consequences.


On a lighter note, my next Post will be titled “Varicosities” and will explain my feelings on tattoos.  Please come visit.
Posted by Doctor Eclectic at 12:09 PM