A year and a half ago I presented a lecture on the Affordable Care Act to a group of retired military officers.  It was full of uncertainties, but was timely since my position as a National Dental Director put me in close contact with the movers and shakers dealing with the newly passed law.  At the center of the presentation was an explanation of the Exchanges, which were scheduled to begin assigning members to health plans on October 1, 2013.


That date is one week from today and sadly to say I don’t believe there is one state or federal Exchange or one health plan prepared to meet that goal.  Let me explain what happened and what is likely to happen in the near and not-so-near future. 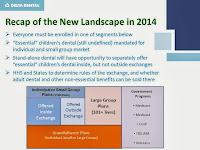 If you look at the diagram of what is an Exchange (attributes to Jeff Album of Delta Dental) you’ll see that the focus of the Exchange was on Small Group (businesses with more than 50 and less than 100 employees).  There was a reason for this.  The U.S. Health Care System kicked off with Kaiser in the late 1940’s as an incentive to provide tax-free income to prospective workers.


And, when you looked at the 56 million uninsured employed, persons in the United States, most of them were employed in Small Businesses.  So, if we want to expand the pool, and by the way, expand the risk pool to avoid healthy people choosing to be uninsured, we would need to put some teeth into requiring Small Business to insure their members.  That was the original intent of the ACA.


Then it got screwed up.


A larger number of uninsured were the Medicaid population.  These are individuals and more commonly family living below that “poverty level”.  In an earlier Post I covered how the “poverty line” was established but suffice it to say that there are two important components: first, the cost of common items included in a normal life style vary dramatically from region to region and particularly are greater in urban areas, resulting in a greater need for subsidies in our cities.  Second, most subsidies, such as food stamps and even cell phones, are not included as “income” in determining whether a family earns enough to advance beyond the poverty level.


The result is that the Medicaid eligible population in many states was financially untenable to support.  So, when the federal government, through the ACA, demanded that the states expand the health care offered through Medicaid, many states said, “No.”, even though the first few years would be paid for by federal dollars.


What can we expect?


A new occupation is the Navigator, a term used to define methods to steer members through the Exchange choice process.  Much money has been allocated for this function and none of it is going to actual health care.  One is reminded of how many are now employed by the TSA and how that has resulted in higher air fares with greater delays and poorer service.


One can also expect an early increase in premiums as the insurance companies cope with the new tax levied on the to support ACA subsidies.  We will definitely see huge variances in premium and coverage from state to state, since the definition of essential health benefits is all over the place.


And unintended consequences are already occurring: large employers (more than 100employees) are casting out expensive programs, such as Retired health, providing set amounts to place these people in the Exchange.  This population, by the way is exactly counter to the healthy population needed to make the Exchanges work. 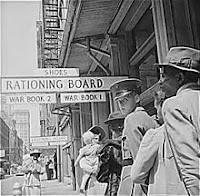 And major health plans, such as Aetna, are choosing to stand on the sidelines to see how this plays out, lessening the competition among the big players that was expected to curtail costs.  My old company, WellPoint/Anthem, id a player in 12 states and in all 19 regions of California, but they are almost the exception, rather than the rule.


Regardless of how Congress settles the Fiscal Cliff and defunding of the ACA this week, rollout of the ACA will be delayed from the January 1, 2014 deadline, and the animal that we will eventually see is going to be exceptionally different from that expected in 2010.


Later today I am going under the knife for a hip replacement.  Sounds like a topic for my next Post.  Join me to see how it all turns out.
Posted by Doctor Eclectic at 9:41 AM