Last week marked the passing of a unique writer who was both prolific and excellent: Elmore Leonard.  The media was flooded with remembrances, not surprising as he wrote more than 50 books and short stories, 26 of which were adapted to film or television.  He was the resident expert in Westerns, Crime, and at the beginning the genre that would give one of his greatest fans, Quentin Tarantino, a title for his memorable film: Pulp Fiction.


He started as an ad writer but found it too boring and quickly began turning out Pulp, not so much for creative outlet as for money.  As he often said he was separate from creative writers as he always wrote for profit and was not ashamed that he did. 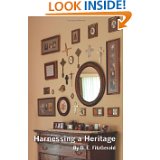 I wrote a book: Harnessing a Heritage, a memoir, which is not surprising since the author’s most prophetic advice is, “If you want a good book, write about what you know.”  I continue to write in this Blog medium as it fulfills my creative need and takes about as much time as I can dedicate to writing, in a full and fruitful life.


When I stop and think why I don’t write fiction, I believe it is not because I couldn’t craft a plot, or even because I couldn’t handle the twists and turns that make Mysteries so attractive.  I believe the flaw in my writing is character development and dialogue.  Perhaps that is why I had so much respect for Leonard.  In an interview on NPR by Scott Simon, he was asked, how he captured the dialogue of his characters.  He opined (he would have never used opined, as rule umber 3 of his “10 Rules of Writing” is “Never use a verb other than ‘said’ to carry dialogue”) , “Well, don’t you hear the people talking?  That’s all I do. I hear a certain type of individual.  I decide whatever he should be, whatever it is, and then I hear him. Well, I don’t hear anybody that I can’t make talk.”  He also explained his talent of making really bad people, likeable:  “I think of them as normal people.  The guy who is going to rob a bank gets up in the morning wondering what to wear today.”


He was 86 years old when he died of complications from a stroke.  He wrote to the end, with an ongoing television show, Justified, in its third season on FX. Interestingly, he stayed involved with his film and television projects.  The cast and staff of Justified, based on a character in several of Leonard’s books named Raylan wear wristbands that say WWET (What Would Elmore Think?).  He wrote many of the screenplays for his film adaptations and some for movies other than from his books. 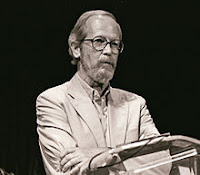 Leonard openly admitted, with a certain measure of pride, that what set him apart from the crown was that he wrote to earn a living while others wrote for prestige, tenure, or for other writers.  Whatever his motivation, his style brought entertainment to me and many others.


In my next post I will share some recent knowledge I gained about PTSD.  I hope you’ll join me.
Posted by Doctor Eclectic at 8:57 AM