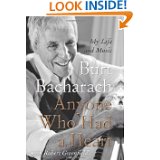 Burt Bacharach has written a new biography and Scott Simon interviewed him recently on NPR.  As I listened I found myself thinking what an interesting life he has led: a music career spanning more than four decades with contributions to pop culture, film and even Broadway.  What is it about his music that has such great appeal? 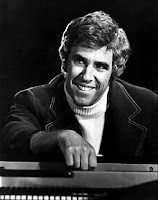 To hear him answer that question he claims it is his trust in melody.  From early training in classical music he used his knowledge of variety to, in his words, “Trust anything you can whistle” leading to movie hits like Alfie, The Look of Love, Casino Royale, Arthur’s Theme (Best That You Can Do), and Raindrops Keep Falling on my Head: all very different but all easy to hum or whistle.  And all songs that stay in your head long after the water for the shower has been turned off.


One of the things that set Bacharach apart is his appeal as a singer’s songwriter.  Setting aside for the moment his long and very lucrative association with Dionne Warwick, he has written signature hits for such superstars as Barbra Streisand, Tom Jones, Dusty Springfield, Roger Williams, B.J. Thomas, Gladys Knight, Cher, and Aretha Franklin, and for such notable musicians as Herb Alpert and Sergio Mendez.


While the words of many of his almost 75 top 10 hits are what stick in our mind Bacharach would be the first to say he was not a lyricist.  The majority of the songs he is remembered for were co-written with Hal David, and of the remainder, many by third wife Carole Bayer Sager.  In the NPR interview he jokes about those collaborations, saying that many of the songs were contentious as to what lyrics fit his melodies.  His prime example was when he and Carole were writing That’s What Friends are for, which went on to raise literally millions for AIDS research.  For some reason Burt felt the song should begin with “And I…”.  Eventually in his words she gave in “just to get out of the room”.  Whether the beginning achieves the conversational element he was trying to achieve, there is no doubt the song struck a chord with millions of fans.

My personal theory of his success is that he achieves what one Blues singer said is the lesson learned by the truly great musicians and singers; namely, not what to put in to the music but what to leave out.  This leaves many of Bacharach’s songs memorable because they have unique syncopation: Take Do You Know the Way to San Jose or The Look of Love, or One Less Bell to Answer, or one of Dionne Warwick’s best: Promises, Promises.  The syncopation and phrasing are what keeps us from losing the song from our head.


It is ironic that Warwick, who charted almost 40 Bacharach-David singles during the 20 years from the mid-sixties, finally declared bankruptcy this March, citing as reasons an inability to settle a seven million dollar federal tax liability and three million in business tax liability to the state of California.  As another songwriter who uses syncopation, Bob Dylan has said, “Some will rob you with a gun, others with a fountain pen.”

Bacharach’s book has a lot of anger in it, but it does cover a tremendous span of time when music has morphed itself into an eclectic grouping, which we can now enjoy streaming and personalized in a dramatic fashion.


My next post will be a reprise of a post I wrote about 18 months ago on HeLa.  The revisit is prompted by action against the companies that have used replicated cells for financial gain without compensation to the family.  A decision by German courts caused this issue to be revisited.  I think you will find it interesting.
Posted by Doctor Eclectic at 12:21 PM

Email ThisBlogThis!Share to TwitterShare to FacebookShare to Pinterest
Labels: Bacharach, Dionne Warwick, Promises, Scott Simon, That's What Friends are for