As so often happens, about three things happened recently to make me think about where Telemedicine and more particularly, teledentistry have developed.  The first was a story on NPR describing a recent robotic venture by USC that allows interpretation of reactions from a remote site by accumulating data and forwarding it for review by an off-site Psychologist or Psychiatrist.  The incentive for developing the robot came because of the increasing disparate distribution of service personnel suffering from Post-Traumatic Stress Disorder or other complications of battle fatigue.  I placed a link to the story here.


The second was a series of references I came across while preparing a presentation to the American Association of Dental Consultants recently.  My subject was an explanation of those skill sets that need to be developed for a Dental Director to be effective in improving efficiencies in healthcare delivery.  One that caught my attention was what has happened recently to improve evaluation and delivery of needed services in geographically underserved areas.

The third sprang from the second when I heard a presentation on what the University of the Pacific School of Dentistry has been doing with Grant money in a program they title the Virtual Dental Home, delivered by Paul Glassman to the quarterly meeting of the Oral Health Access Council.  Dr. Glassman summarized his two-year Grant program with an excellent synopsis that directly countered the two major arguments against using expanded function: that it would establish a two-tiered system of healthcare and that it doesn’t save any money. 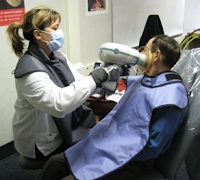 The breakthrough came from a surprising direction.  I had thought that using mid-level providers, in the UOP case hygienists specially trained to collect data by camera, computer, and mobile radiographs, would translate into monetary savings.  Not so much.  The training itself is a limiting factor in cost savings, as it takes a limited resource (hygienists) who generate a good income from their normal activities (cleaning teeth) and places them in remote areas performing tasks that, for the most part, are unreimbursed.


But aren’t preventive services cost saving in the long run?  In today’s world of  “if you can’t measure it, it doesn’t count”, the answer is essentially “No”.


It turns out that the savings come from a ten-year study that tracked literally thousands of teeth that were intentionally filled with a bonded composite material over active carious lesions.  This is termed Interim Therapeutic Restoration or sometimes Atraumatic Restorative Treatment (ART).  The acceptance of the science and wisdom of treating both primary and permanent teeth in this manner and following the restored teeth over time to evaluate the need for further treatment allows successful intervention for much larger populations.


As the dental codes for the 2015 Current Dental Terminology are being discussed a code for this treatment is a strong contender and is likely to be a reimbursable procedure.


I hope that Dr. Glassman is successful in spreading the word of how his model allows for full control of the patient by the dentist and limiting the need for patients in remote areas to travel for their needed treatment.  Perhaps then we can move this “mid-level provider” conversation from rhetoric to reason.
Having found my dental footing, I believe I’ll address another dental issue in my next post: going to the dentist twice a year.  Please join me as there is a recent study that has the dental world buzzing.
Posted by Doctor Eclectic at 9:45 AM