We recently had a power outage, covering two successive Sundays.  It was a little more, no; a lot more tolerable in Southern California than if we were in New York or New Jersey.  No need to evacuate.  No need for backup generators.  In fact, we were given ample advanced notice as to when and how long it would last: 8:00 AM to 1:00 PM and 8:00 AM to 3:00 PM respectively.  And the first Sunday they finished early.


So, the major complication was what to do about Sunday breakfast.  No problem; we would just “Go Out”.

Going out for breakfast in our lives falls into one of two categories and either is, as they say, “An Occasion.”  The first instance is usually a brunch to celebrate a birthday. Mother’s Day, Easter, or some other special occasion.  It usually involves reservations, a gathering of family and more often than not for me some variation on Eggs Benedict (Who was the first person to think you could improve on eggs by covering them with eggs?).  The second is usually in an airport, waiting for a plane, and separates Mary and me dramatically, she heading for Starbucks and me for the Golden Arches or equivalent. 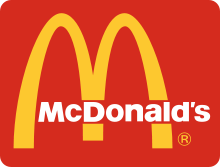 A story I happened upon the other day mentioned that my purchases and a whole lot of others have made breakfast the most popular of Macdonald’s meals, accounting recently for more than 50% of sales.  My guess is this includes a lot more meals than what are sold in airports.


To test that theory I don’t have to look farther than across the street to my older son and my grandchildren.  Although school days offer home meals, if pop tarts constitute home cooking, weekends are definitely out of the house and, if they get up early enough to make the 11:00 Macdonald’s cutoff, probably something from their menu.


Recent popular backlash against fast food would seem to indicate a reversal of fast food breakfasts.  After all, aren’t we united to stop youth obesity?  Maybe not.  Of the twelve propositions voted in California in the November elections one of the prominent losers was Prop 37 which would have required listing Genetically Modified Organisms as ingredients for packaged goods: a story covered in the New York Times.  In a parallel story there has been a recent reversal of a French law, taxing unhealthy ingredients, which brought merchants and consumers united in their opposition, to the streets.  It would seem, at best we are ambivalent about our concerns.

While not related, the timeliness of the Hostess return to bankruptcy causes us to consider whether concern over unhealthy food contributed.  A recent article would argue otherwise, claiming that Union resistance to compromise resulted in 18,000, mostly members, losing their jobs.  And of course, there will be no more Twinkies.  My history with the 80 year-old history of Twinkies comes from two points of view.  The first is that some of those original Twinkies, if still in someone’s possession may be as edible as when they were manufactured.  (Actually Hostess claims they have a 21-day shelf life but they look and feel edible for years).When I do presentations to fifth-graders in the Days of Taste Program, we mention foods that are Good for Me, Foods that are Bad, and Foods that are Foolers.  Guess which group I have the Twinkies in?  Well, at least I don’t have to buy new ones every year and I have a lifetime supply.


The second history is from a play featuring the Twinkie Defense, which protected Dan White from being charged with murder in his action against Harvey Milk and San Francisco Mayor, George Muscone.  His attorneys argued that he was irrational from easting junk food.  The play, which title I forget, was staged at a way off-off Broadway (Santa Ana) venue called the Rude Guerilla, now defunct.  Although I was not in that play, I was fortunate enough to have been in a couple of other interesting plays there, “Boy Gets Girl” and “The Long Goodbye”.


Before I leave the subject of Breakfast Out, I should mention the two restaurants we visited.  One is a local location of The Original Pancake House, where I sampled their Apple Pancake.  Yum, yum!  The second was a longtime favorite we don’t visit often enough called The Snooty Fox, which has excellent Eggs Benedict.  Neither takes reservations and both have fairly long lines, but both have fast turnover and are worth the wait.


My plan for the next post is to tell you how they start Musicals on Broadway nowadays.  Things have changed since my mother took me to see Kismet.  I’ll share with you what I learned after we see Peter and the Starcatcher in NYC.
Posted by Doctor Eclectic at 4:12 PM