I read or heard recently that the Baby Boomers are the first generation in America who, as a group, have no plans to leave an inheritance to their children. Not to imply that they are selfish or that times are so tough that there is nothing to leave.  More, that they are essentially planners, who have ensured their children’s education and, having done so, feel their obligation has been met.


And perhaps it has.

I remember in my own case, when my father died, he left my mother about $300,000 in equities and a house with no mortgage.  My mother, who at the time had no income other than social security and a small pension from the Navy, pretty much burned through that in the next seventeen years; selling the house to move into a condominium, which she eventually sold to me and rented from me.  All would have been gone had she lived long in long-term care.
nd that threat, of living dependently for a long time, is what I think drives the Boomer’s decision.
There is also the case on how to make division of wealth even among their 2.3 children.  I have two children, now grown, and got them both through college and into the work force free of debt, as my father had done for me.  I certainly hope that Mary has some reserves when she passes on; assuming I pre-decease her, but if not, then I feel my children have been well-provided for.
Perhaps for no apparent reason other than the news, I began in this context to think about Steve Jobs. 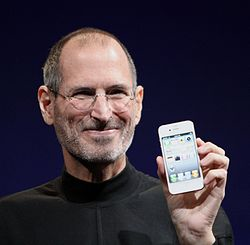 In all the stories, little was said about distribution of his 8.3 Billion dollar estate, or for that matter, of his four children.  What was said, and is relevant to inheritance, is that he quit Stanford because his parents were mortgaging everything they had to keep him in school, and he thought that was unfair to them.  Clearly he felt they had given him enough.  After all they adopted him.
Seemingly he never knew much about his biologic parents until he found his mother and eventually his sister, Mona Simpson, in 1984.  While he respected his mother, he was less impressed by his father who had gone from Political Science professor at St. Norbert to owner of a Bay-area coffee shop, which Steve frequented on occasion without recognizing his father.  Steve’s affection for his adopted parents, “the only real parents I ever knew” was public and deeply-rooted.
So, one way to think about the inheritance his children were left is to repeat what Steve said in a 1995 interview.  “I want to have been as good a father to them as my father was to me, something I think about every day.”
I could make the same wish.  Anything else they get would just be icing on a very good cake.
My next posting will cover a new definition I heard about, the Corporate Dentist.
Posted by Doctor Eclectic at 3:52 PM