<div class="separator" style="clear: both; text-align: center;">Since I left the corporate world and working on a computer with little to do, I have not played many electronic games. Imagine then my feeling of entrapment when the girlfriend of a nephew made me one of more than 300 million people to download Angry Birds. 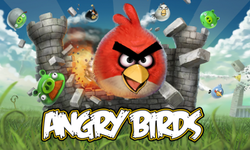 
In fact I have had my Smart IPhone almost two years now and had yet to play a game on it. But one taste of this fascinating design and I became, as many have before me, addicted. Almost immediately I paid an additional 99 cents to the Apple Apps store and got the Screaming Eagle, which literally guarantees success in moving to another level.

My grandson, who is seriously addicted to other computer games, has tried the game, and in fact pointed out to me the special features of the blue bird and yellow bird (divide and accelerate, respectively), but he prefers competitive games with his friends and that option is still in development by Rovio. His father however has downloaded it to his Droid and, muttering his frustration was locked in battle with the pigs for half an hour last Saturday. Together they bought me an Angry Birds Tee-shirt in appreciation for my paying for our annual family vacation.

In researching for this Blog, I was surprised to learn that Sean’s Droid cannot give him the Screaming Eagle option, and that all platforms for the game are tweaked a little to allow as much access to features as their compatibility will allow. The game is truly international, not surprising, given its Scandinavian birth. One fact, learned more from anecdotal than research data, is that one either loves or hates the game. That division of passion has very little to do with kicking the addiction of playing. Like golf, another game that essentially pits one against oneself, some people seem to get enjoyment out of failure.

I was reminded of a book that came out in 1957 (and in paperback in 2010) called “Where Did You Go? Out. What Did You Do? Nothing”. http://www.amazon.com/Where-Did-Out-What-Nothing/dp/0393339416/ref=sr_1_1?ie=UTF8&qid=1312910291&sr=8-1#_ In the book the author, Robert Paul Smith, reminds the reader of a simpler time, when we were told to “go out and play”, with no mention of what we were to play or what the rules of the games were. Those we learned from the other kids who were sent “out to play”. Games with national, if not international rule-sets sometimes had different names in different regions, but there was little argument as to how the game was played.

It may have been unintentional, and I may be the exception rather than the rules, but one of the pleasant surprises about playing Angry Birds is the discovery phase, of what worked in destroying the protective structures and what didn’t. I think as one gets older, discovery is, of itself, a destination as well as an accomplishment.

So, I don’t apologize for my addiction, and I am proud to say I have completed game 1 in all its 21 levels and am ready to start Poached Eggs…with the help of the Screaming Eagle.

Next week I’ll explain a little more about my grandson and his computer activities and why they bother me a little.
Posted by Doctor Eclectic at 12:24 PM